This is the web site of Joe Johnston, a software architect and team leader in the Greater Boston area with over two decades of industry experience developing web applications for the Cloud, Intranets, and Desktop using many Open Source tools.

I am currently /not/ looking for new opportunities. 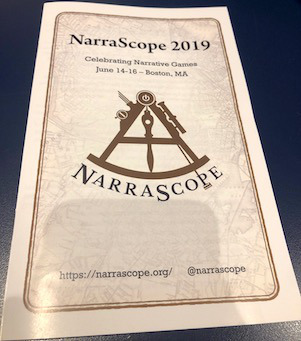 2019 saw the first big outreach project of the Interactive Fiction Technology Foundation in the form of a conference named NarraScope. I was luckily enough to attend it, as it happen essentially in my backyard. Since this is the only conference I will be going to this year, NarraScope is sort of my Comicon and The Perl Conference bundled into one event.

The three day conference kicked off Friday night in the Stata building of MIT. If you have never been inside this building, it does indeed appear to be the site of a tragic Star Trek teleporter accident.

Although I missed the opening day on Friday, I did make it on Saturday, where I was greeted by Jason Scott in full conference regalia. This was our first meeting IRL, which went swimmingly. We compared our statin prescriptions and I missed most of the keynote talk.

I then attended the State of Twine talk by Chris Klimas, which was really motivating for me. I do not have the time for a lot of side projects, so I feed vicariously off those who do. Twine is having very typical growing pains that are common for open source projects. Logistical issues like deciding what is the right feedback back mechanism for the community, who’s steering the project, etc. elicited deja vu. Inform’s [Graham Nelson], who was in attendence at the time, echoed the same issues. Some of this is where IFTF can and should help. Other aspects, these projects will have to figure out. I was super jazzed to be in the room.

After lunch, I attended the performance of Squinky’s “How Making Videogames Turned Me Into a Depressed Gay Communist” and it was intense. To describe it will not help. You have to see it for yourself.

I then chatted with Graham Nelson for a long while, professing my admiration for Inform, which I compared favorably to Perl. Inform will be open sourced under Larry Wall’s Artistic License, about which I am gladden. Also connected with Aaron Reed of Blue Lacuna fame.

Although the conference continued, I needed to get back home. My thanks to IFTF for pulling together a great conference. Here’s hoping for bigger and better things next year.